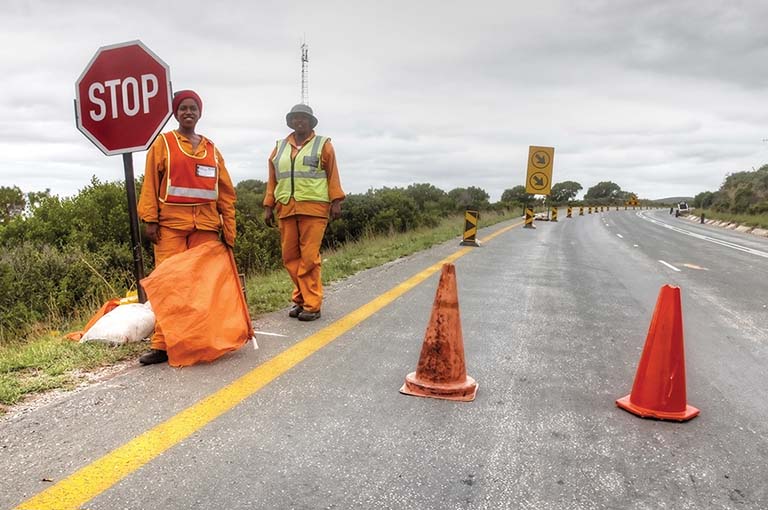 South Africa is internationally one of the most unsafe countries for road travel (see ‘South African road deaths vs the world’ https://businesstech.co.za, accessed 9-5-2018). Fourteen thousand of its citizens (38 per day) die on its roads and as many as an estimated 524 000 persons – based on annual hospitalisation figures and fatality rates – are annually injured in road crashes.

The Road Safety Annual Report  2017 published by the International Traffic Safety Data and Analysis Group and the International Transport Forum states at p 16 that out of 40 countries SA has the highest fatality rate per 10 000 vehicles (see http://dx.doi.org, accessed 9-5-2018).

In ‘Costs of crashes in South Africa – Research and Development Report August 2016’  by the Council for Scientific and Industrial Research (CSIR) and commissioned by the Road Traffic Management Corporation states that the 2015 cost to the South African economy is stated as R 142,95 billion equating 3,4% of Gross Domestic Product (GDP) (www.arrivealive.co.za, accessed 9-5-2018). These costs are calculated on the graph (on p 21) by the Road Traffic Management Corporation (RTMC) report at p ii.

According to GA Kumar, TR Dilip, L Dandona, and R Dandona in ‘Burden of out-of-pocket expenditure for road traffic injuries in urban India’ (2012) BMC Health Services Research 285 the pervasiveness of financial cost of road crashes is illustrated by a study in India where public spending on health is low. Significant ‘out-of-pocket expenses’ for the mostly impoverished communities are high – the average being 2,5 times more than average usual annual medical expenditure. Transport costs, food, etcetera, was equal to the average medical expenditure for hospitalisation due to any other illness, creating a double burden on households.

The RTMC is responsible for road safety in SA and operates under the auspices of and reports to the Department of Transport.

The Department of Transport in cooperation with the Road Safety Advisory Council have devised a National Road Safety Strategy for the period of 2015 to 2020, which deals with practical issues, such as –

These strategies are devoid of unequivocal, conscious concentrated and concerted actions focused on law enforcement. The building of capacity for law enforcement is not mentioned, which is central to the Australian Road Safety Action Plan, which emphasises the reduction of drunk driving and the enhancement of national law enforcement (http://roadsafety.gov.au, accessed 11-5-2018). For example, since the introduction of random breath testing in Australia in 1982, fatalities decreased from a high of 28,9 per 100 000 of population in 1970 to 4,1 in 2014. In 2017 the New South Wales (NSW) Government spent AUD$282 million on road safety. The Australian Government is responsible for regulating safety standards for new vehicles, and for allocating infrastructure resources, including for safety, across the national highway and local road networks (https://infrastructure.gov.au, accessed 11-5-2018). In SA Road Safety is a national responsibility, for example, the 2015/2016 Gauteng Provincial transport budget did not make any provision for road safety. Department of Roads and Transport was allocated R 6,6 billion for its core programmes. This was allocated to five programmes, namely, Administration (R 318 million); Transport Infrastructure (R 2,26 billion); Transport Operations (R 2,19 billion); Transport Regulations (R 281 million) and Gautrain (R 1,5 billion) (www.polity.org.za, accessed 23-5-2018).

A concerted effort to the active promotion of road safety in SA is mostly only visible during peak holiday periods, such as Easter and Christmas. The results of these periods are usually touted as being a positive outcome of such campaigns.  This strategy is misconceived. First, fatalities occur throughout the year at a rate of 14 000 per annum. This figure translates to 1 167 deaths per month or 39 deaths per day. During the 2017 December holiday period 1 527 South Africans lost their lives. Of these 37% were pedestrians (see Paul Herman ‘Pedestrian deaths biggest contributor to festive season road death toll’, www.news24.com, accessed 11-5-2018). The festive season started with the schools closing on 6 December 2017 and ended when they re-opened on 17 January 2018, which is a period of 42 days. The corresponding previous period was from 7 December 2016 to 11 January 2017 or 35 days. The death rate for the 2016/2017 festive season was 1 714 (49 per day) and for 2017/2018 1 527 (36 per day). When the period of the festive seasons for the periods compared are equalised to 35 days, the fatalities during 2017 reduces to 43 per day – a positive outcome of six fatalities. This outcome does not consider the comparative traffic densities for the periods compared, which were not revealed in the government’s press releases. Against the six lives saved during the 2017/2018 festive season, 12 837 South Africans lost their lives in the 11 months preceding the 2017/2018 festive season. Second, most fatalities occur within a 60 km radius from the deceased’s residence (see CM Leveau and MN Vacchino ‘Residence place as a risk factor in different types of fatal car accidents’ 2015 22(2) International Journal of Injury Control and Safety Promotion 95 www.tandfonline.com, accessed 11-5-2018 and see also P Lehohla ‘Road Traffic Accident Deaths in South Africa, 2001 – 2006: Evidence from death notification’ www.statssa.gov.za, accessed11-5-2018). This is because more kilometres are travelled near a road crash victim’s work and residence compared to festival season and vacation journeys.

The Victoria, NSW, zero tolerance approach was adopted by the KwaZulu-Natal (KZN) provincial government in 1998 with limited success. Reasons for the failure have been researched and were given as the limited success in the transfer of skills, knowledge and understanding of the theory and practice of the Victoria’s Road Safety Strategy leading to the conclusion that the Victoria Solution cannot be transposed into foreign environments without significant review and adaptation based on local expectations and conditions. Nothing has transpired since and KZN road fatalities went into serious regression since 2002. No recent evaluation could be found but the 2016 RTMC fatality figure for KZN is given as 2 715 (see D Myers ‘The KwaZulu-Natal Road Safety Project five years on: Success or myth? An External evaluation’ https://repository.up.ac.za, accessed 11-5-2018).

Constant and effective law enforcement has the potential to produce effective and immediate positive results due to the correlation between the number of vehicles involved in collisions and traffic offences (see RTMC 2011 Road Traffic Report www.arrivealive.co.za, accessed 11-5-2018).

Another contributory reason for the lack of road safety may be the insufficient number of traffic officers (usually blamed on lack of funding). Nationally there are only 18 000 officers when 100 000 are required (see S Sesant ‘Dire shortage of traffic officers’ 23-11-2016 accessible at: www.iol.co.za, accessed 11-5-2018).

Of course, road safety is not only concerned with law enforcement. Other aspects such as infrastructure, safe vehicles, road user behaviour and post-crash care are relevant and should be separately thoroughly investigated. 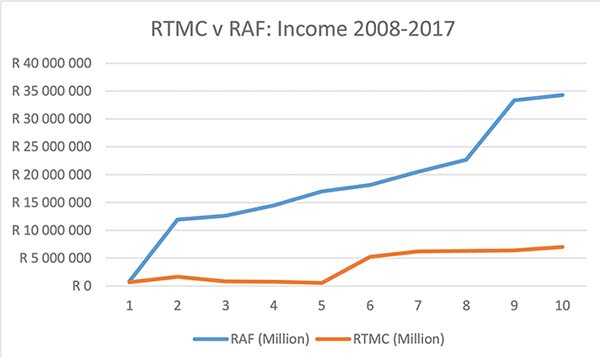 It is obvious that to be effective the RTMC must be adequately funded. A comparison between the RTMC (prevention agency) and the Road Accident Fund (RAF) (agency dealing with the consequences of road crashes) can shed light on both the adequacy of funding and the priorities in spending.

This is inexplicable considering the R 142,92 billion cost of road traffic crashes to the South African economy. The higher expenditure on the consequences of road crashes (RAF) than its prevention is entirely short sighted and imprudent. More so, in view of the additional R 10 billion per annum government funding of the RAF (consequences) in 2015/2016 fiscal year under unfavourable economic circumstances. This funding could preferably have been allocated to the RTMC to financially bolster its law enforcement capabilities, reduce road crashes and consequently its exposure to the consequences of road traffic accidents. Prioritising prevention of road crashes may make the RAF funding problem disappear. The government’s behaviour rails against its avowed general overarching policy of ‘A better life for all’. Especially against the backdrop of the fact that 37% of road accident victims are pedestrians who may be counted as the poorest of the poor (see ‘South Africa’s shocking road death numbers at highest level in 10 years’ Businesstech 9-6-2017 https://businesstech.co.za, accessed 11-5-2018).

Apart from the financial reasons for the increased and active promotion of road safety, there is another cogent human rights issue, which should guide the government when dealing with road safety and that is the fundamental right to safety from all sources of physical and other harm. This includes harm caused by road crashes.

Section 11 of the Constitution provides that: ‘Everyone has the right to life’, while s 12(1)(c) states that everyone has the right to freedom and security of the person, which includes the right ‘to be free from all forms of violence from either public or private sources’. Section 21(1) guarantees the right to freedom of movement. I submit that the conjunctive reading of these sections lay the basis for a right to live free from the threat of death and debilitating injury. It, in my view, particularly obligates the state to ensure that its citizens are not exposed to violence, which originates from the use of roads.

Section 12(1)(c) underpins s 3 of Universal Declaration of Human Rights of the United Nations. This international obligation of governments has seen the establishment of the rights of the child, the rights of women, the rights of workers, and the rights of people in development in general. These rights have further been elaborated and substantiated by international human rights instruments, such as the International Covenant on Economic, Social and Cultural Rights; the Convention on the Rights of the Child; the Declaration on the Elimination of Violence Against Women; and the Employment Policy Convention (Convention No. 122) (see D Mohan ‘Safety as a Human Right’ Health and Human Rights Harvard University 2003 161 and United Nations, International Human Rights Instruments  www.uohchr.org, accessed 11-5-2018). These rights and their extension, lay the basis for the recognition of a right to safety (Mohan in Mike Mitke ‘WHO declares the individual’s right to be safe’ (2002) 17 Journal of the American Medical Association 306.) This notion of a right to safety was translated by the Delhi Declaration into material form and explicitly stated by the Montreal Declaration at the sixth World Health Organisation Conference on Injury Prevention and Control held in Montreal in May 2002. Section 1 states that safety is a fundamental right and is essential for the attainment of health, peace, justice and wellbeing. Section 11 places a responsibility on states to respect and protect the right to safety and to develop mechanisms to protect the people’s right to safety against any violation by agencies, including corporate bodies.

Based on the Constitution and internationally accepted principles, I submit that South Africans have a right to live free from debilitating injury and threats, which impinge on their right to life. In the context of road travel this right translates into a governmental obligation to protect its citizen’s right to safety. Or stated differently, to take practical, pro-active and efficient action to ensure effective road safety.

The economic costs of traffic crashes amount to a staggering R 142,92 billion per annum. Although the South African government has framed an impressive and credible road safety strategy its practical implementation seems to be inefficient and/or ineffective. Judged on the level of its spending on road safety, its political will to effectively grapple with the pressing road safety issue is not demonstrated. The lack of adequate road safety and its consequences is costing the country billions and unduly exposing its citizens to death and debilitating injury which impinge on their constitutional right to life and right to be free from all forms of violence from either public or private sources. In this regard the citizens of this country have a constitutional right to road safety and the government has a constitutional duty to take effective and practical steps to ensure road safety and the consequent drastic reduction of road crashes to protect its citizens who are involved in road crashes and of which a sizeable proportion are the poor against the likelihood of violence emanating from their use of South African roads. After all, this in completely in line with the government’s overarching policy of ‘A better life for all’. Ignoring its duty in this regard can hardly be said to be the hallmark of a caring government.

Professor Hennie Klopper BA LLB LLD (UFS) is an Emeritus Professor in the Department of Private Law at the University of Pretoria.