The Road Accident Fund (RAF) is already in a shambles. But the proposed alternative, the Road Accident Benefit Scheme (Rabs) could make it worse, especially because it would also allow drivers at fault in an accident to lodge claims. This will have serious consequences.

The Road Accident Fund’s net deficit could expand from the R206.3-billion recorded in the 2017-2018 financial year to at least R225-billion should the planned changes go ahead.

If drivers at fault are to be included in claims, the implementation of Rabs is estimated to cause the expenditure of loss of support claims to jump from R3-billion to R21.6-billion, according to Professor Hennie Klopper from the University of South Africa, who heads of non-profit group Protection of Road Accident Victims (Aprav).

He says that this alone equates to an increase of at least R1 a litre on the fuel levy. 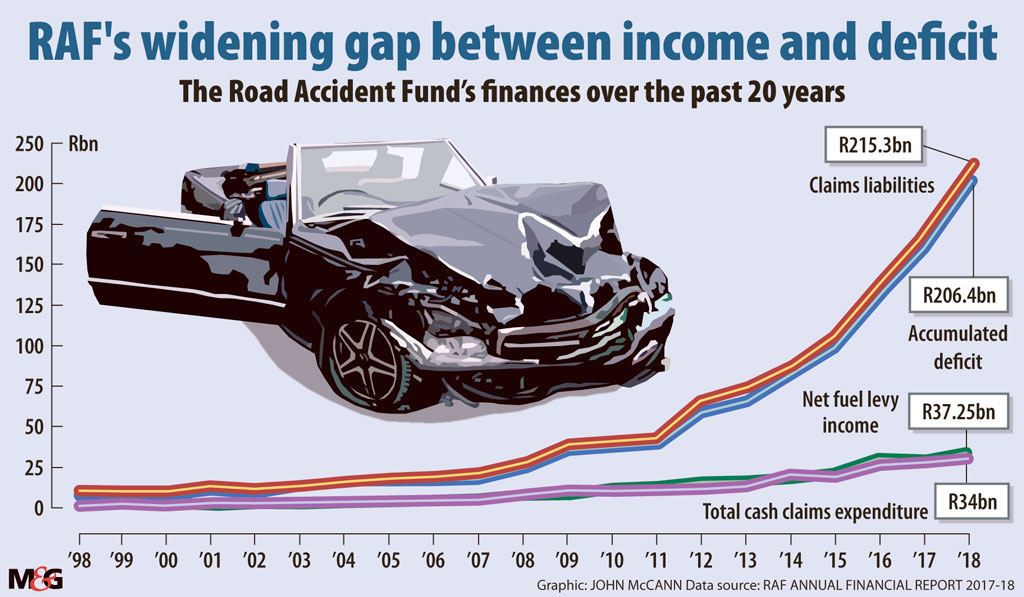 Klopper adds that the loss of support claims is only one example of what would drive up costs.

“The claims multiplier effect also applies to loss of income, medical and funeral costs,” he says. “The increased number of claims and the periodical payment of benefits is set to drastically escalate Rabs administration costs. No estimates have been given by government.”

The introduction of Rabs as a replacement for the RAF failed late last year when too few members of Parliament attended the sitting on the matter. Parliamentary records show that the Rabs Bill lapsed on January 9. According to the rules of the National Assembly, if a Bill has lapsed, the process has to start again from scratch, which according to Aprav could take up to two years.

Deidre Carter from the Congress of the People (Cope), who used to sit on the portfolio committee on transport ,which debated the bill last year, says there’s been very little support for the controversial Bill.

“Even though the ANC tried to push it through a second time, they failed. Every single political party, with the exception of the ANC, felt that it is not in the best interest of the people.”

The Bill includes a controversial amendment to the current accident compensation scheme referred to as the no-fault based system. According to the RAF, this amendment would remove the requirement to establish fault as a determinant to qualify for benefits.

The chairperson of the portfolio committee on transport, ANC member Dikiledi Magadzi, hopes that the Bill will be brought before Parliament again.

“I [can] still confirm that the Bill has not lapsed. That can be so if we fail to process it before the rise of the fifth Parliament. For now, I [the portfolio committee] shall wait for the Parliament programming committee to reschedule when we resume during February,” Magadzi says.

She adds that the biggest overhaul of the Act is the addition of the no-fault system. “We are saying, let’s enable the issue of who’s at fault of the accident to be dealt with by law enforcement, so we can focus on the accident itself.”

According to opposition parties who voted against the Rabs Bill and Aprav, the Bill is not in the interest of the South African people and is completely unaffordable.

“With the no-fault system, even a drunk driver causing an accident will be able to claim,” says Carter.

The RAF argues that the no-fault clause is meant to simplify the tedious and expensive current bureaucratic system and make available timeous and appropriate healthcare based on a reasonable tariff.

According to an analysis of RAF claim applications between 2013 and 2017 conducted by the Mail & Guardian, it takes an average of 972 days to finalise a claim that requires medical certification. In addition, the RAF spent R8.8-billion on legal and other expert costs in the 2017 to 2018 reporting period.

Magadzi says that there’s a slim chance of the Bill being put forward to Parliament within the next few months, if not within the next year or two. “The debates have been done,” she says. “The only thing that is needed is to curate it, then it goes to the National Council of Provinces.”

Pieter de Bruyn from Aprav says the organisation will take all the steps required to prevent this Bill, in its current form, from being passed, even if it needs to approach the courts.

“For reasons not known to Aprav, the department of transport is hellbent on getting Rabs through, with no adequate research, planning, consultation or consideration of the complicated realities of South Africa,” he says.

Who is APRAV and how can we assist you?
Scroll to top